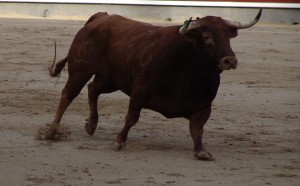 The yearling calf , “becerro” (a one or two-year
old bull) is born, after nine months of gestation
within a group called “Punta”. During the first
nine months of life, it is fed with breast milk and it
stays along side of the other young, its mother and
the stud bull. Nine months later, the males separate
from the females into different groups. When the
animal turns two, it is no longer a yearling calf, but
rather a “Novillo”. The “Novillo”, under the
age of three is called “Eral” and the one who has
already turned three is called “Utrero”. Only when
the animal has turned four can it be called bull,
“Toro”.
The “Erales” (two or three-year old males)
undergo different trials in order to select the best
bulls capable of producing off-spring that are
“toros bravos”, fighting bulls. The “Tienta” is
the test that the stockbreeder conducts in order to
check the fighting spirit of the males and females.
The behavior of the first offspring in the bullring
will be the definitive test to determine if the stud
bull becomes part of the stockbreeder’s team or if it
must be sacrificed.