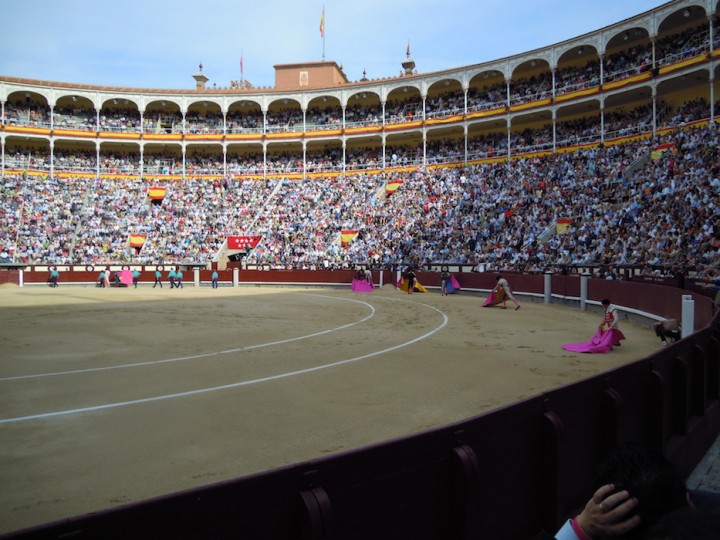 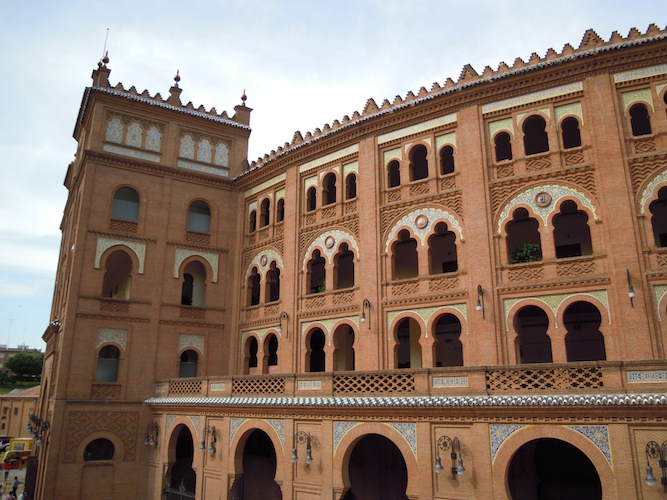 The bullfight is neither a fight nor a competition between a man and an animal.

A fight between a 70kg weigh man and a 600 kg bull makes no sense. The animal is physically far superior to a man. But neither is the bullfight a sport in which two opponents compete for victory, like a football game. Defenders of bullfight consider it tan art. The bullfight is an eminently artistic show structured in three acts (Suertes) in which the bullfighter, facing a real danger, using his thecnical skills and following rules established by tradition will end up killing the bull.

Being the bull a living being it is very difficult to use it for artistic purposes. It is a dangerous and unpredicable adversary. The bullfight will have to be brave to face the danger, but also reasonable and know well the art of bullfighting.

The Bullfighting Museum was opened in 1951 and is located in Las Ventas Bullring, next to the Horses Courtyard ( Patio de caballos). The opening hours are From March to October , Monday to Sunday 10 to 18 hours, but the days on which the bullfight is held only 10 to 16 hours; From November to February Monday to Sunday , 10 to 18 hours. The visit is free.

Among the interesting things you can see we would highlight the collection of prints echted in aquatint by Francisco de Goya, wherein are represented various bullfihts “Suertes” and Passes performed at the arenas; the bronze sculpture of Juan Belmonte by Luis Sanguino; the big portrait of Manolete by Espinosa; the color prints by José Vallejo y Galeazo; the engravings by unkown autor: “La Cogida Mortal De Pepe –Illo” and “La Cogida Mortal De Antonio Romero” that represent the death of two famous bullfighters; Four color echtings by known artist about the four Suertes of Bullfighting; the heads of mythical bulls

In the first two stages of the bullfight, the cape is used to “situar en suerte”, in

other words, to take the bull to an ideal spot to be jabbed by the Picador and to be

stabbed in the neck with the “Banderillas”. But the bullfighter also uses the cape

artistically. There is a wide range of ways of using the cape.

In the early days of bullfighting the knights went out on horse back and their assistants on foot dressed in cape and they used them in their fight with the bull. Over the years this Capa was replaced by the Capote, which was red and made of wool. Currently it is pink ahead and yellow, green, blue or purple behind, according to the preference of the bullfighter. Nowadays the Capote is made of synthetic material (nylon) or silk to prevent the horn from engaging the cloth and it is treated with chemicals to keep it from penetrating the animal’s blood and to give it weight and stiffness. 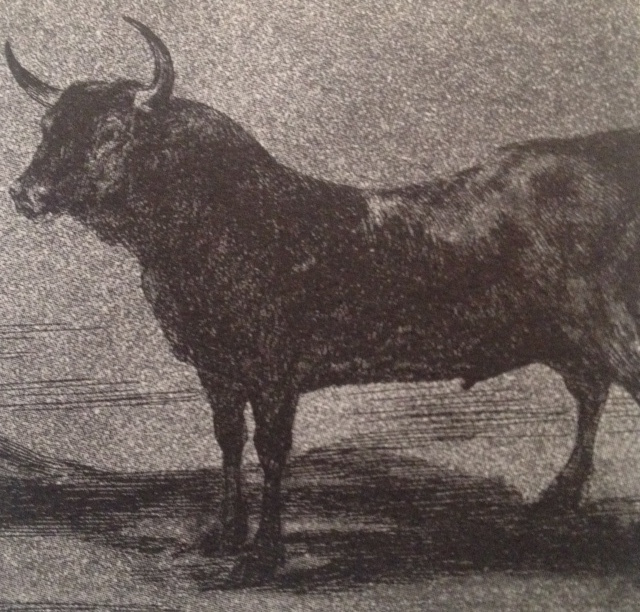 On September 27th Leo Valadez, Jesus Colombo and Carlos Ochoa will fight in Madrid against bulls from El Ventorrillo. The public of Madrid is looking forward to seeing Leo Valadez, one of the most interesting Mexican bullfighters today

Leo Valadez was born in 1997 in Aguascalientes, Mexico. He studied at the Aguascalientes School and at the Fundación El Juli, in Arganda. Leo was the first student to get a scholarship from CITAR ( Centro Internacional de Tauromaquia y Alto rendimiento). He fighted for the first time on June 9th 2013 with Francisco Jose Espada and Cristian Climent against bulls from Antonio Lopez Gibaja.

Technically he handles very well l the Muleta with the left hand, uses aristically the cape and , sometimes , plays the roll of a Banderillero.

Leo Valadez has in the great Mexican bullfighters his great references. “I learn watching his videos, especially David Silveti and Manolo Martinez, are my two favorite bullfighters. It’s time for Mexico to have a new great bullfighter and I will fight to be him. “. He dreamed with fighting at the most importat european bull-rings, but he never forgets Mexico: “I am proud to be Mexican and having success at home will make me very happy.”

Alberto Aguilar was born in Madrid in 1986 .He started to study at the Taurine School in Madrid on October 5th, 1998. His teachers were Carlos Neila, José Luis Bote, Serranito and Joaquín Bernadó. He fought his first calf in Castilforte (Guadalajara) on August 2nd, 1999. That same year he won the Calf Cycle Competition held in Pozuelo del Rey (Madrid).

In 2000 he made his debut in public in El Batán on July 15th with Novillos from Rocío Sebastián Erice. In 2001 he fought dressed in bullfighter costume for the first time in Las Matas (Madrid) against bulls of Víctor Aguirre being rewarded with three ears. That same year he fought a total of 33 calves, with important triumphs in Dax and Bayona,

On January 4th he participated in Vistalegre, with Novillos ofrom Pablo Mayoral and Mercedes Figueroa, being awarded with two ears.

That same season he compited at VI National Contest of Novilladas. He also fought in Las Ventas Bullring on March 2n in a festival for the victims of the Prestige, with Luis Francisco Esplá, Francisco Rivera Ordonez, Manuel Caballero, Julio Aparicio, Uceda Leal.

His debut in a Novillada with Picadores was on July 23, 2003, in Villalba (Madrid) with Javier Solis and Luis Bolívar and Novillos from Angel Luis Peña. He was awarded with three ears. The season ends with eight novilladas.

In 2005 he completes his best season as a Novillero, acting in 33 Novilladas , participating in the main Ferias . He was awarded with one ear on May 16th in Madrid.

On August 13th 2006 he obtained the standing of Matador de Toros in Miraflores de la Sierra, , with Ivan Vicente as Padrino (Godfather) and El Capea as Testigo (witness ) and was awarded with three ears. The 2009 season was truncated by a serious knee injury, which prevented him from being able to fight for a long time.

In the last years he have improved his skills as a bullfighter very much and we are looking forward to seeing him fighting in Madrid on September 24th. 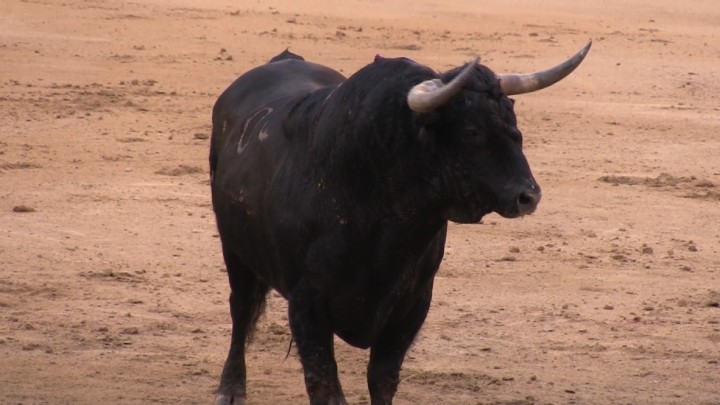 Manolo Montoliu (1954-1992) was an spanish Bullfighter and Banderillero. He was born in Valencia and killed by the bull Cabatisto in Sevilla. In the year 2017 will be held in Valencia several tributes to this great Matador.

But what is a Banderillero? What are Banderillas?

One of the things that most impresses those who attend a bullfight for the first time is the stage of banderillas ( Tercio de Banderillas). It is brief, since it usually does not last more than five minutes, but very intense, because the man faces the bull without the protection of the cape or the muleta. It can also become an aesthetic experience, if the banderillero does his job well and the bull charges fiercely. However, it is not easy to understand its meaning and sense within the framework of the entire bullfight.

The main objective of the Stage of “Banderillas” is to prepare the bull for the next stage: The Stage of Muleta (Suerte de Muleta). The Stage of Varas is the phase in which the bull is lanced by the Picador in order to weaken it and prepare it for the Stage of Muleta (Suerte de Muleta). After being lanced the bull has lost its initial impetuosity , lowering its head and charging only just when it is provoked by the Matador. And now its aggressiveness must be a little bit awakened in order to equilibrate its strenght and be prepared to the stage of Muleta. The bull feels a sharp pain when the “Banderillas” have pierced its back and it Seems to regain his strength and fierceness

Three bullfighters’ assistants or sometimes the bullfighter him or herself jab the bull’s back with three pairs of “Banderillas”. The bull feels a sharp pain when the “Banderillas” have pierced its back.

In the chapter X of “Death In The Afternoon”, Hemingway wrote about the Stage of “Banderillas”, Providing very interesting data to better understand this important part of the Bullfight.

“Act two is that of the banderillas. These are pairs of sticks about a yard long, seventy centimetres to be exact, with a harpoon-shaped steel point four centimetres long at one end. They are supposed to be placed, two at a time, in the humped muscle at the top of the bull’s neck as he charges the man who holds them. They are designed to complete the work of slowing up the bull and regulating the carriage of his head which has been begun by the picadors: so that his attack will be slower, but surer and better directed. Four pair of banderillas are usually put in. If they are placed by the banderilleros or peones they must be placed, above all other considerations, quickly and in the proper position. If the matador himself places them he may indulge in a preparation which is usually accompanied by music. This is the most picturesque part of the bullfight and the part most spectators care for the most when first seeing fights. The mission of the banderilleros is not only to force the bull by hooking to tire his neck muscles and carry his head lower but also, by placing them at one side or another, to correct a tendency to hook to that side. The entire act of the banderillas should not take more than five minutes. If it is prolonged the bull becomes discomposed and the fight loses the tempo it must keep, and if the bull is an uncertain and dangerous one he has too many opportunities to see and charge men unarmed with any lure, and so develops a tendency to search for the man, the bundle, as the Spanish call him, behind the cloth when the matador comes out for the last act with the sword and muleta.”