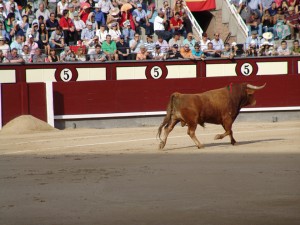 As bullring’s staff show a banner with the name and weight of the first bull on it, one of the “Alguacilillos” gives the key to the bull’s pens to the “Chulo de Toriles” ( the person in charge of opening the door from which the bull comes out into the ring ). Once the “Areneros” have cleaned the ring and everything is in order, the president taking out the white kerchief, orders the first bull to be released.

After a short sound of the bugles, the door of the bullpen is opened and the bull goes out into the arena. 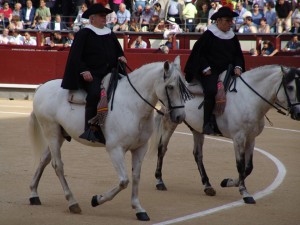 Once the ring has been cleared, the opening procession starts. Preceded by the “Alguacilillos”, the bullfighters and their teams go around the arena to the royal box to greet the President. The three bullfighters do so in order of seniority. Seen from the front, the most veteran is to the right, the most novice is in the middle and to the left is the one with intermediate experience. The “Banderilleros”( the ones who jab the bull with the “banderillas”) are situated also from right to left, according  to their seniority and they march behind the swordsman. Following them, two by two, the Picadores and finally, the Mozos de Caballos ( the horseman’s assistants), the “Areneros” ( the men in charge of the sand in the bullring) , are followed by the mules and the “Mulilleros” ( the men in charge of bringing the dead bulls out of the arena). 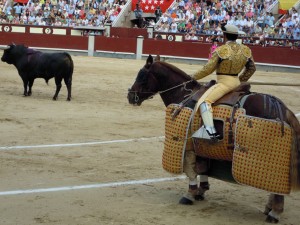 See the  schedule of events 2014 at www.bullfightticketsmadrid.com